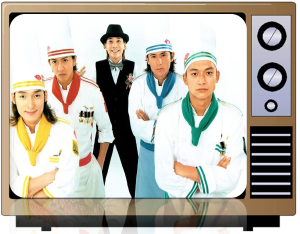 Want to watch their past variety episodes but do not know which to watch first?

Members in the comms can read and make episode reports on any arashi and smap's variety programs.
Let's have fun sharing their hilarious variety episodes through reviews! =)

A mini shout-out before going back to my hiatus.

The new movie titled ‘Stand By Me’ is said to mark the final episode of the Franchise.


The screenplay is done by 49-year-old Takashi Yamazaki (who did the screenplay for Always Sanchōme no Yūhi / Always: Sunset on Third Street). He is co-producing the Doraemon film with 48-year-old Ryûichi Yagi, who also directed Friends: Mononoke Shima no Naki (friends もののけ島のナキ), where SMAP's Shingo Katori voice-acted in the film.

The Doraemon will be the 36th Doraemon film

Hi, thanks for dropping by my live journal.

Please give me your support if you are fans of either or both of the bands!

Hope to interact with you more in my communities!

I refer to a post I saw online.
The fan analyzed Nino's solo in the group's newest album.
20825日目の曲

Today I decided to pop over to Raffles Hotel in search of Sho('s photo).

So coincident, Japan aired this 謎解きはディナーのまえに”！？in シンガポール today. Haha if I have known they will be airing that program, I would have watched the program and then plan more places to visit and take photographs at the exact spot where they took the photos.

So today's post will be on Raffles Hotel only.
Let's begin tracing the sights that Sho and Nazodi team saw. 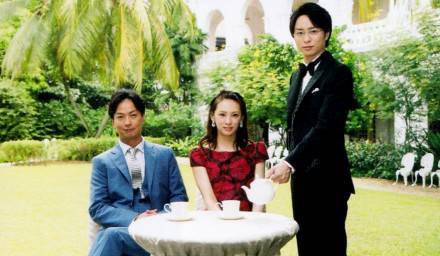 For my next tracing Sho's stay in Singapore post, I will trace the public viewable places where Sho and the NazoDi team went/did during their program:謎解きはディナーのまえに”！？in シンガポール and also his 影山の航海記録 in Jweb. Here's a preview:

One of the picture he took in 影山の航海記録 was very similar to this:

I don't want to publish the actual picture he took so I try to take as similar as the one he took.

Pictures and webs links were all provided by fellow kind Arashians.
I will be updating this post frequently or daily only on contents regarding the premier screening held in Singapore/featured Singapore.I am expanding the collection heehee.

There was an explosion of media reports on the premier screening of Nazotoki Dinner no ato de movie in Singapore.
Here's a collation of the media reports I found that appeared in Singapore, Japan and Hong Kong.

Newspaper:
1) My translation for one of the Singapore chinese paper: here
Sho watches batman to prepare himself as Kageyama 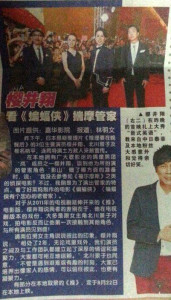 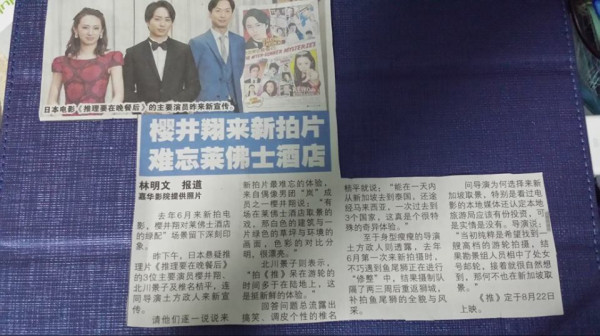 Translation:
When Sakurai Sho visited Singapore last June to film his movie, the vivid colours left an impression on him. He said "There was a scene which used Raffles Hotel as the background. The white (Raffles Hotel), building, the surrounding lush greenery, along with other elements in the environment were very pretty because their colours contrast each other.

Shinna Kippei was always smiling and gave out a cheeky vibe whenever he answered questions from the media. He said he was quite amused to know that one can travel to 3 countries in on day, for example from Singapore to Thailand, and on the way pass through Malaysia, is such an amazing experience. (I think he is saying that because he had to transfer flight, from Singapore, then stopping at Thailand then back to Japan?)

As for the director, he said that when they came to Singapore last year, the merlion was in renovation, therefore they had no choice but to return to Singapore 2-3 weeks later just to take that shot that has the merlion in it.

When asked why the director chose Singapore as the filming location, he said it was purely because he was looking for a very extravagant cruise ship. The location management team chose the Star Virgo, so he thought of filming in Singapore too. 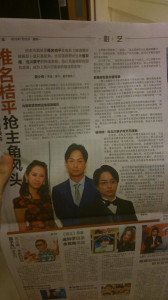 Shiina Kippei san was very humorous and smiley, as compared to the restrained vibe that Sho and Keiko had. Sho was very careful with his words while Kippei-san injected humour whenever he answered and lightened the mood.

When asked about the impression they had on SIngapore, Kippei san said "I once sat on the cable car to Sentosa, the view was stunning, I could see kids playing in the sea, and the head of the merlion! When we filmed in Singapore last year, the merlion along the Merlion walk in the city area, was under renovation. That merlion was small, as compared to the one in Sentosa.I absolutely loved the merlion in sentosa, I wanted so much to crawl into its mouth and explore!"

Sho thought for a while and expressed that "When I was in Clarke Quay eating chilli crab, I had a plastic apron on, I felt it was very interesting as the restaurant in Japan uses plastic aprons".

Keiko said "Although we filmed in Singapore for 10 days, but most of the time we were in board the Virgin star Virgo, we didnt get to visit many tourist attractions. but the food on baord the cruise ship was nice, and many fans enthusiastically said hi to me, I felt that Singaporeans are so nice and friendly".

The film director said that holding the premier screening here in Singapore is to thank the SIngapore fans so that they can catch the first glimpse of the movie.

He also said about the actors and actresses. "Sho's acting is natural so I do not need to worry. Keiko's role transition from a cop to a socialite is an interesting and attractive point, Kippei is very experienced, left me a very deep impression".

Keiko elaborated more on her thoughts "Having collaborated with Sho for 2 years, I understood how Hosho Reiko will feel insecured and uncomfortable wuthout Kageyama. In real life, we have a deep friendship. I respect and relied on him. I believe everyone can feel that connection through the movie.

Sho said that he and Keiko had developed a strong trust and unwritten undertanding towards each other, due to the long period of collaboration in work. He pointed out that due to the busy schdule, the 2 has no interactions outside work.

When they were asked if they will return to Sinfapore to fim again, Sho said "If not too many audience watches the film, I think its really difficult to come back here again to film haha" whereas Keiko said she hopes to spend more time on land. Kippei replied "Next time if I am here to work in Singapore, I defintely will request to stay in a hotel where I can see the big merlion, so that I can see it even if I'm lazing in the pool hahaha!"


5) Little India is a district in Singapoe where it is rich with the Indian Heritage. 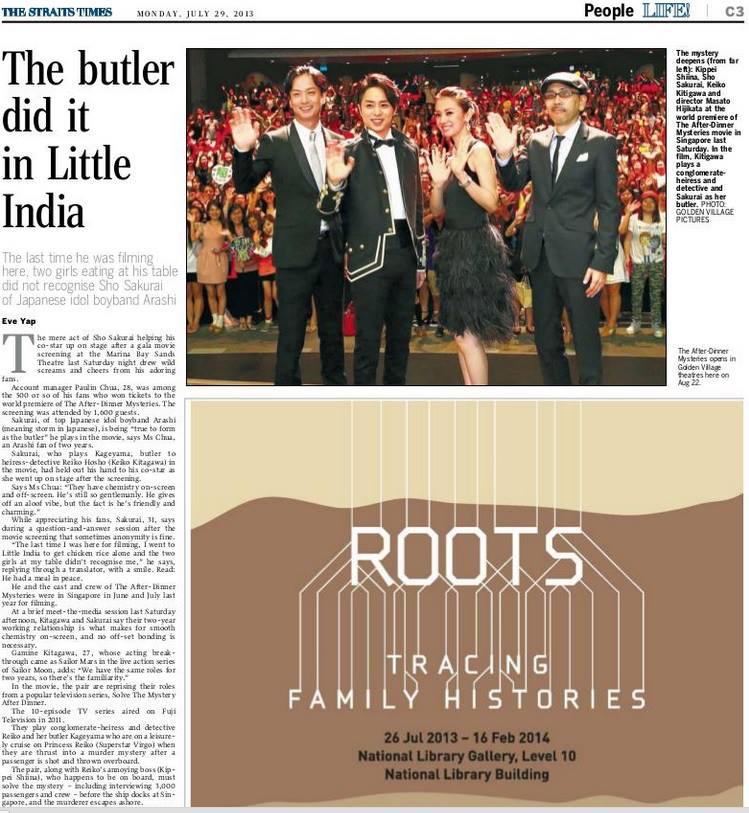 The content is the same for all the things that were covered by the other reports, so im not translating it. 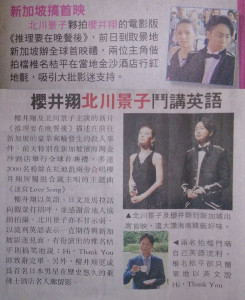 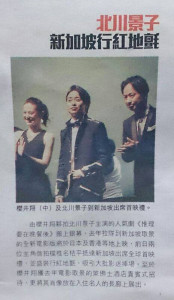 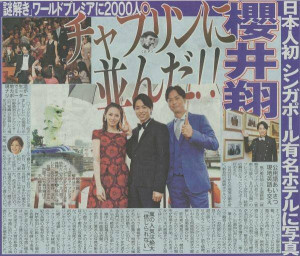 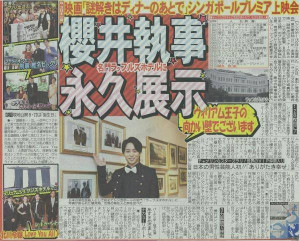 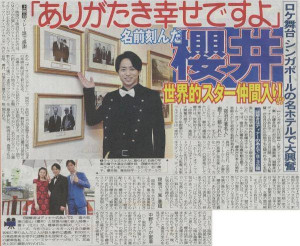 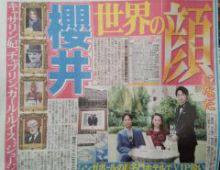 mochipan has also included other media reports from Singapore. Do take a look here too newly added on 17 august

Singapore major chinese magazine I-weekly featured Sho as the magazine cover with at least 6 pages interview.
ITS RARE! to have japanese star/s being feautured as the cover person in our local magazines.  newly added on 18 august 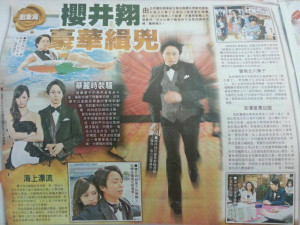 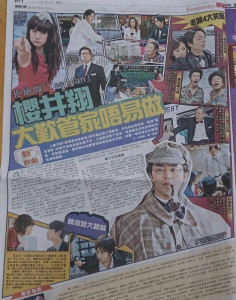 
Please don't repost the translation. A credit to me and a link back which of my lj post u found my translation is fine ;) Thanks!

Sakurai Sho watches "Batman" to prepare for his role as a butler. 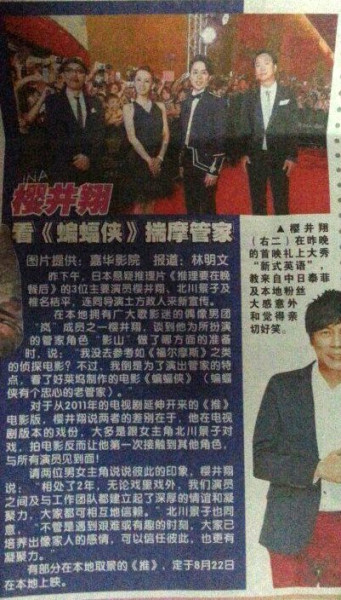 Sakurai Sho is part of a japanese group called [Arashi], an idol group who has a wide fan-base here in Singapore. Sho shared that for his butler role as Kageyama, "I did not watch detective genre shows such as [Sherlock Holmes], rather, I watched [Batman] as a reference to capture the special characteristics of a butler (p/s: Batman has a loyal and faithful butler).

When commenting on the film, which is the extension from the television drama aired in year 2011, Sho commented that the difference between the drama and the film is that he interacts with Keiko's role most of the time. Whereas in the movie version, he get to interact and see other fellow roles, for the first time in his filming for nazotoki dinner no ato de!

When Keiko and Sho were asked to comment on the impression they had of each other, Sho said: "Having collaborating with each other for the past 2 years, the actors, actress and production staff have built a very strong and deep friendship and unity, in regardless of inside and outside the filming. Everyone was able to trust each other".

Keiko also agrees. " Through tough or interesting times, everyone has become close to each other, like a family, we were able to trust and unite further".


Please don't repost the translation. A credit to me and a link back to this post is fine ;) Thanks!

MORE posts I done on Sho's trip in Singapore:

Also a fellow fan report from


Kageyama created a sensational stir in SIngapore. Apart from the 500 plus fans who appeared in the airport on Thursday afternoon 25th July to welcome him, his filming for the movie promotion in front of the iconic merlion (at friday 26th July) also created a stir. The world premier of nazotoki dinner no ato de movie sees the gathering of approximate 2000 fans at July 27th evening. The fans sang the movie's theme song " Meikyuu Love song" to welcome the casts.

1 year ago, Sho stayed in Raffles Hotel for a night to film nazotoki dinner no ato de. This time, he stayed for 2 nights. When he attended the premier screening, the hotel put Sho's photo into the [Hall of Fame] which was along the halls corridor. The Hall of Fame contained pictures of famous people, which included the Duke and Duchess of Cambridge.

Sho is the 6th Japanese to have his picture in the Hall of Fame, which included Sony creator Akio Morita, and the second japanese entertainment artiste, alongside Sumiko Fuji.

Sho also used his own phone to take a few pictures of himself with his potrait in the Hall of Fame. He said: "Next time, I will surely let my kids see these pictures, to show off abit. It's indeed a great honor! There might be many who came for the airport welcome, but it does not mean everyone knows about the movie. I hope more people will get to know about the movie. I will work even harder to not lose to those people in the [Hall of fame], and I strive to be on par with them"

disclaimer on translation: a quick translation on the essence. accuracy may not be 100% accurate.
Please don't repost the translation. A credit to me and a link back to this post is fine ;) Thanks!

Here's one english news from the Singapore's media
and
Sho's picture in Raffles Hotel!

MORE posts I done on Sho's trip in Singapore:

[Rumour] Arashi is in NYC

So far this morning I only saw ppl in weibo saying they saw Nino. One of them even checked in (using foursquare?) an NYC building and said she almost got a signature from Nino but the staff pulled him away before he could put his pen on the paper to sign.Will try to get more updates soon. (the good thing that SG is just 1 hour time difference with JP)Edit 1: They went to Shunsuke Kazama's wedding. And they readily shook hands and waved to fans who spotted them!

Edit 2. heres an account from a lucky fan who shook their hands.